This large conifer is the predominant tree in Bell Park. The species is named after Australian explorer Allan Cunningham (1791-1839) and is common in sub-tropical dry rainforests, on poorer soils and on volcanic plugs and headlands in Eastern Australia. It is often raised in forestry plantations for timber uses including indoor joinery and flooring. The common name comes from the hoops which appear as narrow, horizontal scales that encircle the trunk. It can reach a height of 60 metres with a trunk up to 1.9 metres in diameter.

Male and female cones occur on the same trees, the former being smaller and light brown whilst the female cone is green, about 12cm long with tightly packed flat wedge-shaped winged seeds which are dispersed by the wind. Red-tailed black cockatoos feed on the pinecones seasonally from about November. The debris from this activity can leave an unsightly mess under the trees, but more of the seed is often then consumed on the ground by galahs.

Most Bell Park Hoop Pines were formally planted from the 1920’s to the 1950’s in rows that marked boundaries such as along the beach foredunes, Hill Street and along the access road through the main arched entry – where they were also planted in clusters to provide shade for the park’s visitors. Notable Emu Park residents were responsible for these plantings, including Mrs Emilie Bell (after whom Bell Park is named), Baxter Davidson (Station Master), Michael Ahern (Railway Fettler), Cedric Wakefield (Hotelier), Fred Ryan (Storekeeper), Jim and Bob Mcdougall and Ollie Morris (Fishermen).

In 1953 a row of Hoop Pines was planted along the dunes above Fisherman’s Beach and named Coronation Drive as part of the celebration for Queen Elizabeth’s coronation. The Hoop Pines in Kerr Park near the surf club and along the Hill Street fence of the Emu Park State School are other examples of how well this species grows in the area. 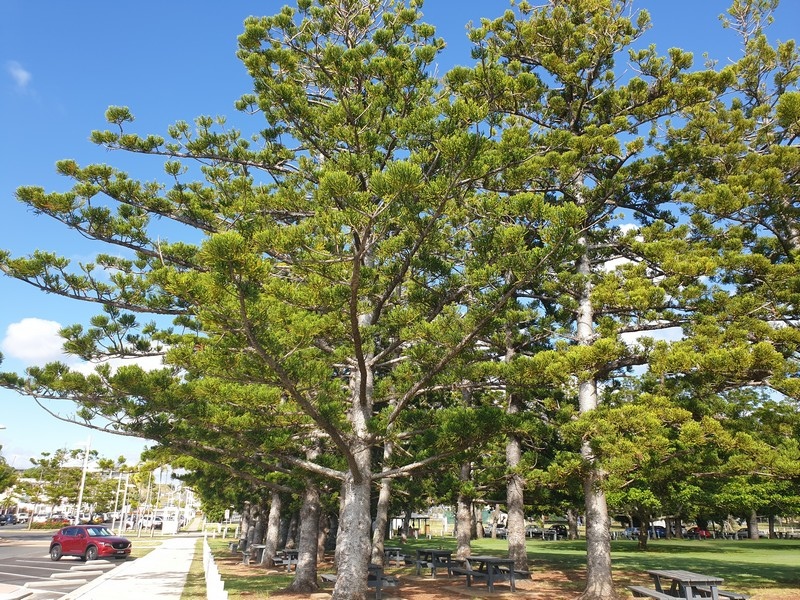