At this site branches of two species of fig tree have contacted and grown together.  Rusty Fig (Ficus rubiginosa) also known as Rock Fig, ranges from the Victorian border to Cape York Peninsula often occurring on rocky scarps and in protected dunes.  The fruit is warty or dotted, yellow or orange, turning red or purplish when ripe. Weeping fig (Ficus benjamina) occurs naturally in far northern Australia only – Cape York and the NT – but is planted more widely. See tree No 7.

Long drooping branches of the Weeping Fig have contacted the damaged trunk of the Rusty Fig, forming a growth bond in the trunk of the latter. The final result of this actively growing bond is unknown, although the Weeping Fig appears likely to be the younger but more vigorous of the interspecies relationship. The two trees share a common “crown”, appearing as one tree until the observer notices the presence of two contrasting foliage shapes and sizes. A further feature of the Weeping Fig is an unusual branch connection with the adjacent Weeping Fig (next tree along the path towards caravan park) where long laterals of both trees have crossed, rubbed and fused. 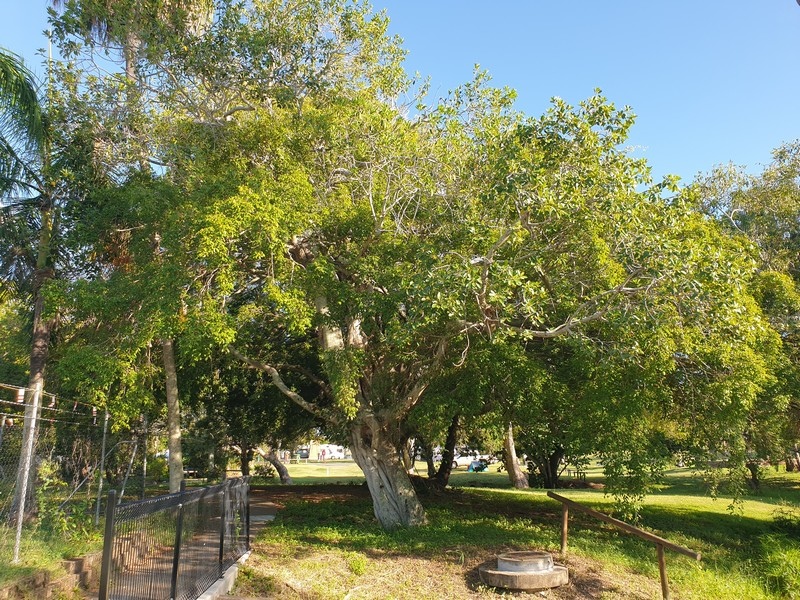